This weekend, our San Francisco Nightclub, Audio, also known as Audio Discotech, will be hosting the best DJ’s and Parties starting Thursday June 26th through Sunday June 29th! Thursday night you will be blown away by an 18 year old DJ from Los Angeles that mixes elements of EDM with Hip-Hop, Friday you aren’t going to want to miss House DJ, Roger Sanchez on the decks, Saturday Autograf’s remixes will keep you dancing and Sunday come to our Pride Afterparty in San Francisco! If you’d like to learn more about any of our San Francisco Nightclub events, visit our website at www.audiosf.com or click the links below! Audio is a 21 and over nightclub located in the SoMa District of San Francisco on 11th street between Folsom and Harrison.

The SOL REPUBLIC HEIST event series continues… this month we present D!RTY AUDIO. Only 18 years old, this Los Angeles native has been producing music for two years and is rapidly gaining a following: In 2012, D!RTY AUD!O began playing sold out shows across US and within a year he was touring internationally. Fusing elements from EDM and Hip-Hop, he has gained support from artists such as Diplo, Deorro, AC Slater, UZ, Flosstradamus, Adventure Club, Krewella, Sidney Samson, Dillon Francis, Baauer, DJ Green Lantern and more. This young, talented artist is primed for a bright future. Catch him live before he drops his debut EP “Lifted” on Steve Aoki’s label Dim Mak Records on July 1. 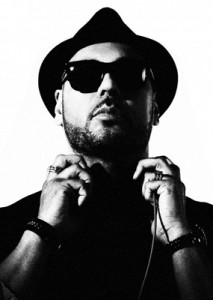 In Roger Sanchez‘s eyes, music is cyclical. It’s about “drawing influences from the past and re-imagining it in a completely different way.” Hence why his forthcoming album will be called Roots. Sanchez’s musical roots go back to the mid ’80s, when the then-teenage breakdancer started DJing, and became fascinated with the new house music making its way to his hometown of New York from Chicago. “At that time, the dominant forms of dance music in New York were freestyle and hip-hop, and house was almost the return of disco,” he says. “It was stripped down and four-to-the-floor, but there was something really magical about it, and it drew me in.” He quickly moved on to producing – his early releases came out under the name Roger S. – and promoting. Many of Sanchez’s early parties were paid for with money he made selling mixtapes on the street in Manhattan’s Greenwich Village. BUY TICKETS/RSVP

AUTOGRAF’s music has been all over the cool kids airwaves these days and we’re stoked to have him headline Saturday. Before the music, there was Future Soup. This was the first creation by Autograf, an eight-foot 500-pound sculpture. It’s an obsession with the Future and the limitless possibilities it holds. What started out as a desire to “make art,” turned into a curiosity to make music. This curiosity has set the Hype Machine charts ablaze with four #2 hits overall and two #1′s for Autograf’s remixes of Marvin Gaye, Stevie Wonder, French Horn Rebellion & Savoir Adore. In a short period of time, Autograf has gained critical acclaim in the blogosphere being named to Indie Shuffle’s annual “Best Remixes” award along with numerous features on ThisSongIsSick, Thump/Vice, Dancing Astronaut, Gotta Dance Dirty and more. BUY TICKETS/RSVP

Sunday June 29th, come to Audio for our Pride After Party! 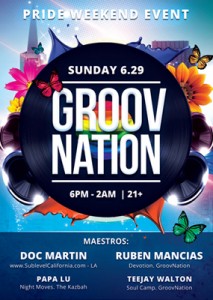 On Sunday, June 29th 2014, during San Francisco’s Pride Weekend, veteran San Francisco DJs, Promoters, and Producers Ruben Mancias, Teejay Walton, and Darren Story will bring together over 30 years of combined nightclub, music festival, and live performance experience to launch Groovnation, a unique house music party that will elevate the dance world to even greater heights.Featuring DJ sets by the legendary Doc Martin (Sublevel), Ruben Mancias (Devotion) , Teejay Walton (Soul Camp) and Papa Lu (The Kazbah), Groovnation will be a journey into a new generation of deep house music while mixing in the “classics” that we all love! BUY TICKETS/RSVP