San Francisco house music DJ, Worthy, will be showcasing his new album at our San Francisco Nightclub Friday night, then Saturday we have Guy J, an Israeli electronic producer who will be playing everything from techno, house music and ambient, and Sunday come to Audio as early as 12pm for our Disco Chateau party to dance to some deep house music with bottomless mimosas, body painting, a burner gear shop that will go till about 2am! Audio is a 21 and over nightclub/danceclub located in the SOMA district of San Francisco on 11th street between Folsom and Harrison St. Interested in bottle service or table service? Email reservations@audiosf.com

Worthy and Friends is taking over Audio Friday July 21st

One of San Francisco’s heaviest hitters is taking over Audio with us Friday July 25th! Showcasing his newest album “Disbehave” along side Anabatic homies Kirin Rider & Sepehr. “Two years ago I created the song Burned, and decided from that song that it was time to create an Album. I did not just want it to be a bunch of tracks but songs that would work together to create one cohesive piece of music. It has been a long amazing and creative road that has let me grow as a musician further than I thought. I finally get to share the whole project with the world today.” - Worthy on ‘Disbehave’ 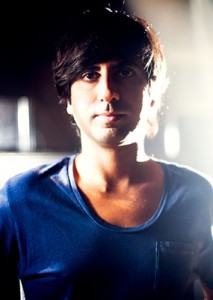 Israeli producer Guy J has established himself as one of the most sophisticated and emotive producers in electronic music of the last decade, with a body of work and a sphere of influence that belies relatively short time in the spotlight. Whether it be his sensual, hypnotic take on house music, his deeply textured techno or his wondrous ambient material, his work is always touched with a magic and emotion that few rival. Never one to be pigeonholed, his portfolio is a diverse beast, with releases finding their way onto Tiga’s increasingly eclectic Turbo imprint amongst others. To feature on two labels that are essentially synonymous with two very different scenes is testament to his versatility, and above all, the quality and conviction of his productions. “I don’t see myself as producer of one genre only; I believe in exploring and trying different stuff when you have all the tools you need to create” he clarifies. 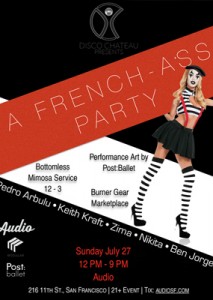 Get REALLY deep (house) with music by Pedro Arbulu of Modular & Special Guests, living statues performed by Post:Ballet, delicious drinks, French Ass Mimosa Maids serving the naughty bottomless mimosas (From 12 – 3), body painting, a Burner gear pop-up shop & elaborate gifts, all while feeling some pre-Playa magic!Disco Chateau is a Burning Man camp dedicated to bringing people together (on & off Playa), creating art & unlocking the wonder that the world has to offer. When we come together, our first priority is helping people connect in a fun, creative & powerful way.